Join me in Checking out the Belgian Waffle Scene in Vancouver - Let's find some great waffles! 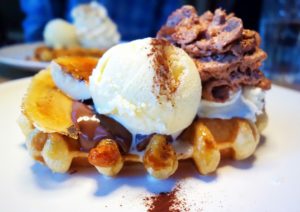 So as you guys know (well...maybe, maybe not), we took a trip to Vancouver in early July.  As we researched, I was surprised by the number of restaurants serving Belgian waffles.  I had no idea Belgian waffles were so popular in Vancouver.  Now, granted, I understand that Belgian waffles are popular everywhere.  Who wouldn't like the delicious crispy outside and fluffy/creamy inside covered in syrups, fruit, chocolate, etc.  I mean, seriously, does anyone not like Belgian waffles?  I digress.  Checking out the Belgian waffle scene in Vancouver turned out to be quite fun.  I mean delicious.  Yeah, delicious.  And fun.

Vancouver has waffle bars!  I mean, whole restaurants that serve nothing but waffles.  Well, maybe they've got a few other things, but waffles!  I love it.  We ate at this great place called Nero Belgian Waffle Bar.  Multiple times.  Usually, on a trip, we would never go somewhere twice.  I mean, there are so many great places to try.  But again, Belgian waffles.  They're delicious.  Nero's has two locations; one on Robson and one on Seymour - both in the city.  We tried both, of course.  The menu at each location is slightly different, but both offer a selection of sweet and savory waffles.  We only had sweet, but the savory waffles sounded amazing, with options such as Brie, walnut and honey, smoked salmon with mascarpone or four cheese with tomato chutney.  YUM.  Am I right?

They have two different kinds of waffle; a light a crispy waffle (the Brussels style) and soft, dense, sweeter waffle (the liege waffle).  Offering both regular size waffles with toppings and mini liege waffles (dipped in chocolate...mmm), the selections are great!  I had to try the orange mousse which consisted of fresh orange pieces and dark chocolate mousse.  Orange and chocolate together is the best, and this waffle did not disappoint.  I got it Brussels style, and the waffle was incredibly light and crispy, as advertised.  Which was great as the day was hot, and a heavy dessert would have been too much (seriously?).  It was awesome. 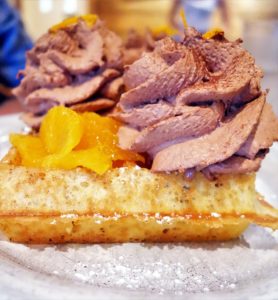 We also tried the Bresilienne with vanilla ice cream, whipped cream, caramel and hazelnut crumble and then the Banella, which is banana and Nutella.  Both liege style.  And both were delicious.  So delicious.  This was our favorite dessert of the trip.  These yummy waffles could also make a great breakfast.  But for real, they are totally dessert-like. 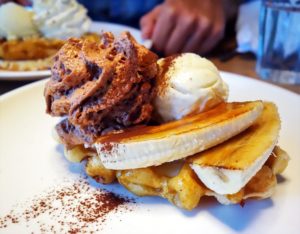 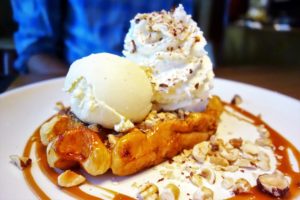 Then there was Medina Café.  We stopped at this uber popular place for breakfast one morning, and of course had to order a couple mini liege waffles as appetizers for our breakfast.  Breakfast apps, am I right?  Needless to say, we left pretty damn full.  The mini waffles here were absolutely amazing.  Crisp on the outside with a slightly creamy consistency in the center, these waffles are sprinkled with powdered sugar and served with a dipping sauce of your choice.  Sauces offered ranged from dark chocolate to raspberry caramel and maple syrup.  We ordered the salted caramel and the milk chocolate lavender.  Both were great, but the salted caramel was definitely the better of the two.  Get here early, there will be a wait.  We arrived about 20 minutes before opening and were about third in line.

What about the other places?

Don't worry, while we didn't get to eat everywhere while checking out the Belgian waffle scene in Vancouver, I've done some research to find out where Vancouverites like to get their waffles.

Patisserie Lebeau - A small spot located on 2nd Avenue, they serve waffles covered in fresh berries and whipped cream, dark chocolate and orange, coconut among many other sweet options.  In addition to sweet, they also offer savory waffles such as the bacon and cheese, spinach and feta as well as sandwiches made with waffles.  Say what?  We should have tried one of these!

Scandilicious - I like this place just for the name.  If I had a restaurant, I would want it to be named Scandilicious.  Offering gluten free options, and both sweet and savory waffles, this place is located right on Victoria drive in Grandview.  Having a rough morning?  Try the hangover helper which is basically an eggs bennie served atop a waffle.  YUM.  Looking for sweet?  Go for the Monkey's Munchies made with peanut butter, bananas, caramel, cookie dough and whipped cream.  That'll get your day started right.  Or put you in a coma.

Just Waffles - Located on Hastings Street, this place serves up a Nutella Lovers waffle, as well and savory options such as eggs benedict or maple bacon and egg.  Or try the cinnamon bun waffle with cream cheese and strawberries.  So. Many. Waffles.

Damiens Belgian Waffles - Offering many different flavors such as matcha, banana/chocolate, cinnamon, caramel and cranberry, among many others, this little spot is also very reasonably priced.  Looking for a savory waffle?  Try the prosciutto and brie waffle.

What did we miss in checking out the Belgian waffle scene in Vancouver?  Do you prefer sweet or savory waffles?  Where's your favorite spot?  Waffles.  YUM.

Like this article? Check out some of these other great restaurant articles: 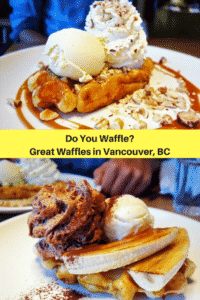 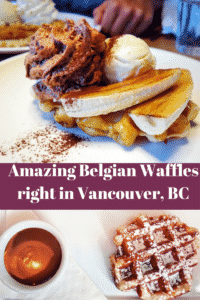