Tacos, tacos tacos! Where to find the best tacos in downtown San Diego, and what to order when you get there! 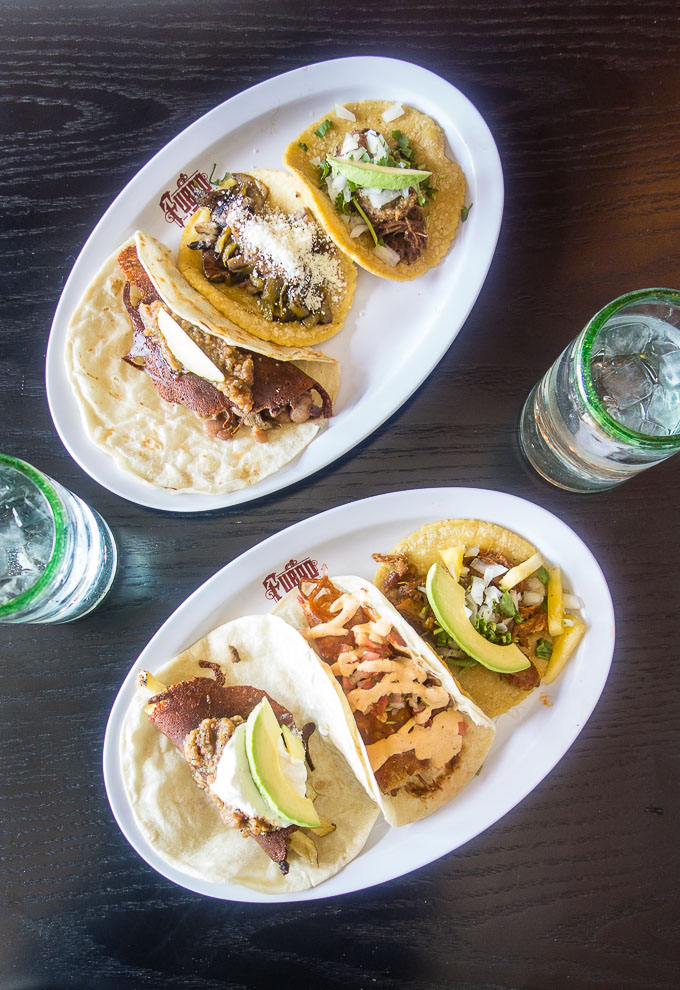 The tacos at Fuego in downtown San Diego

When you come to San Diego, the first thing you think is TACOS!

Ok, maybe not the first thing. There's also that gorgeous weather and those beautiful beaches. Plus tacos.

Now there are SO MANY TACO SHOPs in San Diego. Seriously, so many it's hard to know where to go.

Today we're going to take a look at where to find the best tacos in downtown San Diego. So whether you are staying is in the Gaslamp on vacation, live in the city, or are just heading in for a day of fun, I've got tacos to meet your every need.

With no further ado, here are the best tacos in downtown San Diego, in no particular order:

For all your seafood taco needs. This place reigns supreme in my household. One of several locations, this is one of the few spots that has expanded without losing food quality. The Taco Especial, loaded with smoked fish (amazing), shrimp and scallops is my most favorite taco ever. They also have an awesome grilled octopus and spicy shrimp tacos.

In addition to the tacos, they offer tortas, breakfast burritos, ceviche (which is pretty damn good), and cucarachas. So if you're feeling seafood"y", this is your spot. 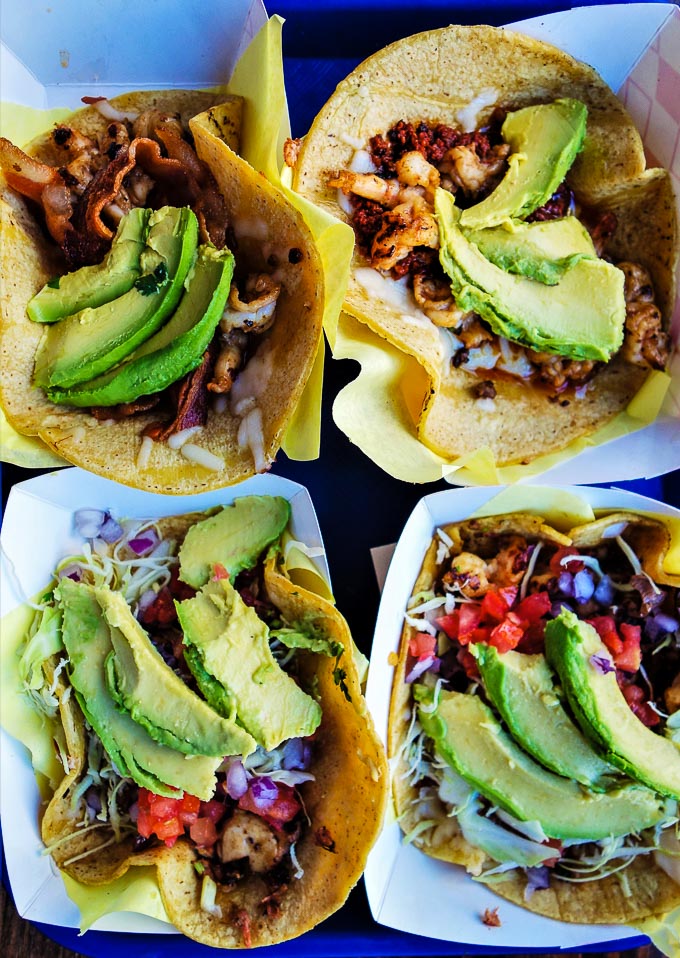 A selection of the best tacos at Oscar's Mexican Seafood.

Another spot that has expanded quickly across San Diego, I love their nopal (cactus) taco here. The spicy shrimp tacos have the perfect amount of spice and the Sonora taco is made with Angus beef, cheese, beans and guacamole. The tacos have a very generous amount of filling, and the salsas at the salsa bar are delicious! 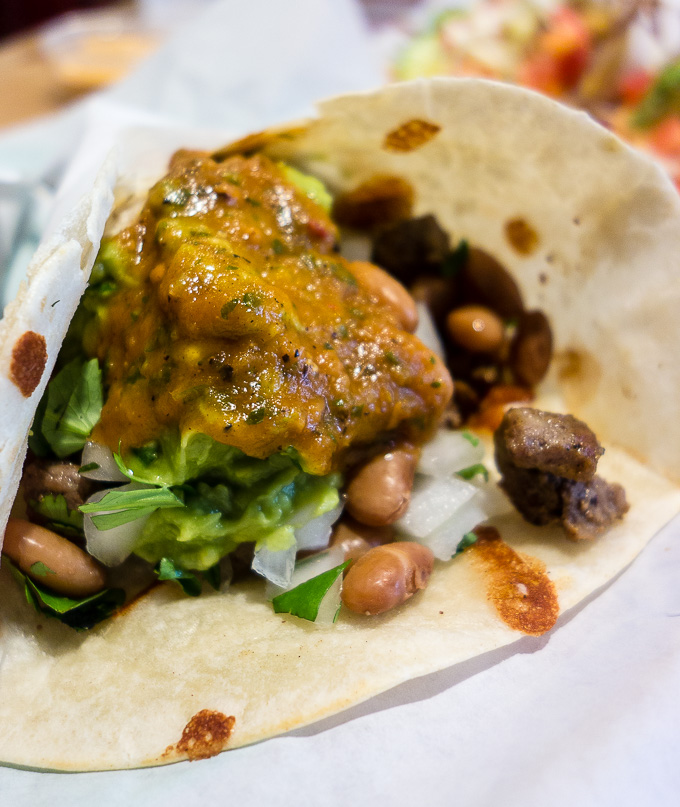 The Sonora taco at The Taco Stand

A somewhat newer taco shop in downtown San Diego, this spot is definitely more trendy than most, with a well designed bar and restaurant area. The prices are a touch higher than your typical taco shop, but the tacos are tasty. Note that the tacos are street tacos, so they are smaller than your usual tacos. The portions are pretty generous though.

I love that they serve an array of different homemade salsas with the tacos, ranging from just a little hot to fire in the hole hot. The smoked tuna taco is pretty damn good, as is the al pastor, and of course the birria. My favorite is the octopus taco in ink. One of the best tacos of my life. The shrimp diablo is also quite good, but it is spicy if you couldn't tell by the name. And of course, you can't forget the chorizo tacos. Who can say no to a tortilla filled with chorizo??? 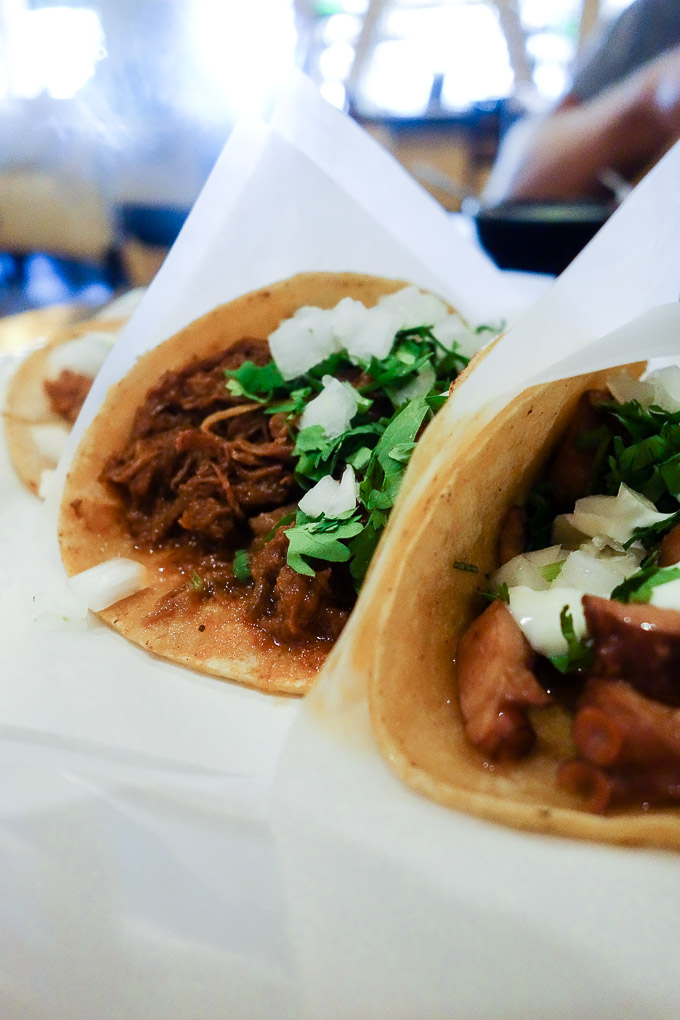 A selection of tacos from Serrano's Street Tacos

Another great spot for seafood tacos. I think these tacos rival Oscar's, and they have a chipotle shrimporizo (shrimp and chorizo) taco that just makes me drool. Their smoked marlin and octopus tacos are also one of my favs. The octopus comes in a garlic butter or an ajillo chili butter sauce. Both are delish! 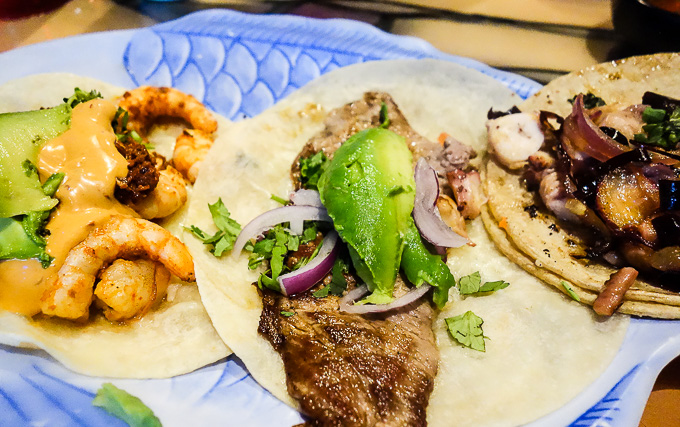 This place is definitely more of a bar than a taco shop, but that doesn't mean it doesn't have great tacos! The lengua (beef tongue) taco is absolutely delicious, as is the achiote shrimp taco with roasted pineapple salsa. Their lobster taco is made with Maine lobster instead of the traditional West coats lobsters we usually see. And the al pastor is delicious, served with bacon!

This spot is a must try for tacos in downtown San Diego!

A super popular restaurant in Seaport Village, or as I like to call it, the tourist capital of San Diego, this restaurant has a great selection of tacos. And they are good. Very good. First off, who can resist ordering the chicharonnes (fried pork skin with chili and lime). A great way to start your meal.

One of my favorite tacos here is actually the zucchini and cactus. I do love that cactus.

The chicken verde is delicious, as is the carnitas, filet mignon and chicken al pastor. All great options. Keep in mind this place is uber popular, so make a reservation or get there early to avoid waiting! 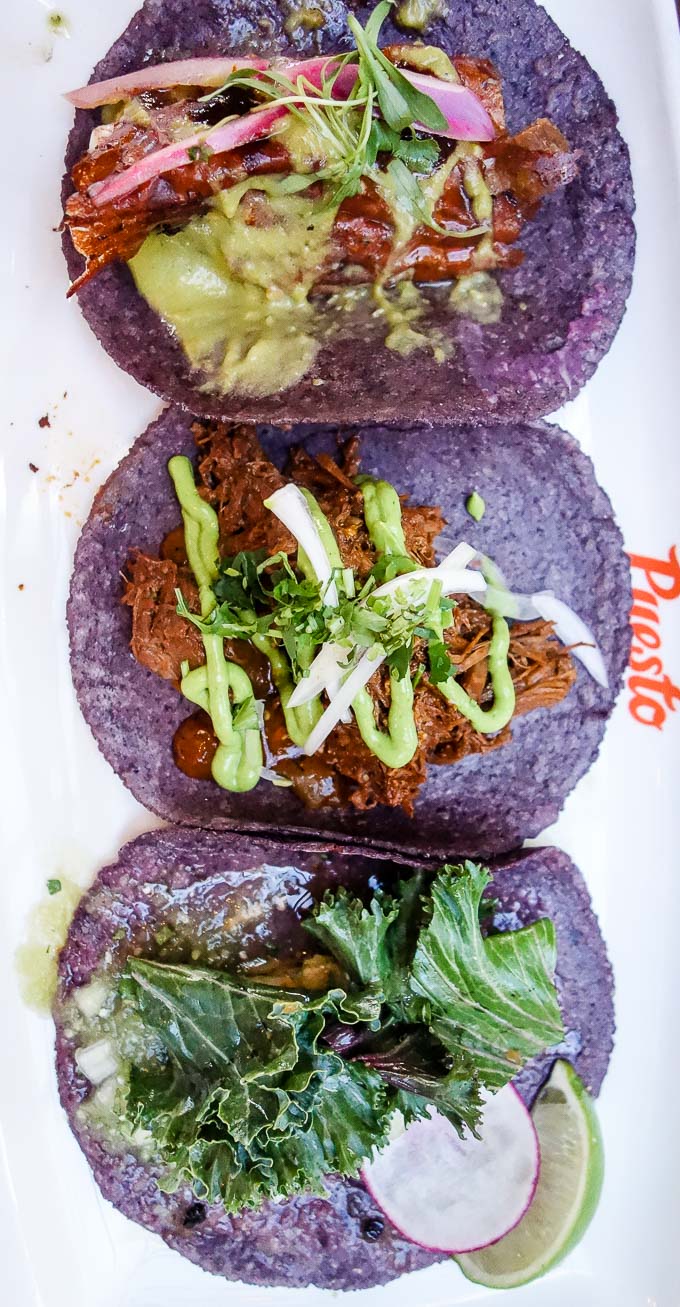 A selection of tacos from Puesto - look at those blue corn tortillas!

A pretty new spot right off market (where J Wok used to be - R.I.P. J Wok), the tacos here are GOOOOOD. They have a California taco guys. For those of you not in the know, a California taco consists of carne asada and french fries...plus all your other taco goodies like avocado and cheese. The shrimp and bacon is also a great choice. I mean, of course it is, it's shrimp and BACON.

The al pastor was good, as expected, but I really enjoyed the el poblano. I'm a sucker for poblano peppers, and while not a vegetarian, this is a great vegetarian option for those who are (I just don't know how you do it...). And don't forget the short rib taco, it's delicious!

They also have a good selection of burritos, carne asada fries, quesadillas, and breakfast burritos.

While the place is just a tad pricey (downtown prices guys, get used to it), it was totally worth the $ and one of the few spots that I'd frequent more than once. 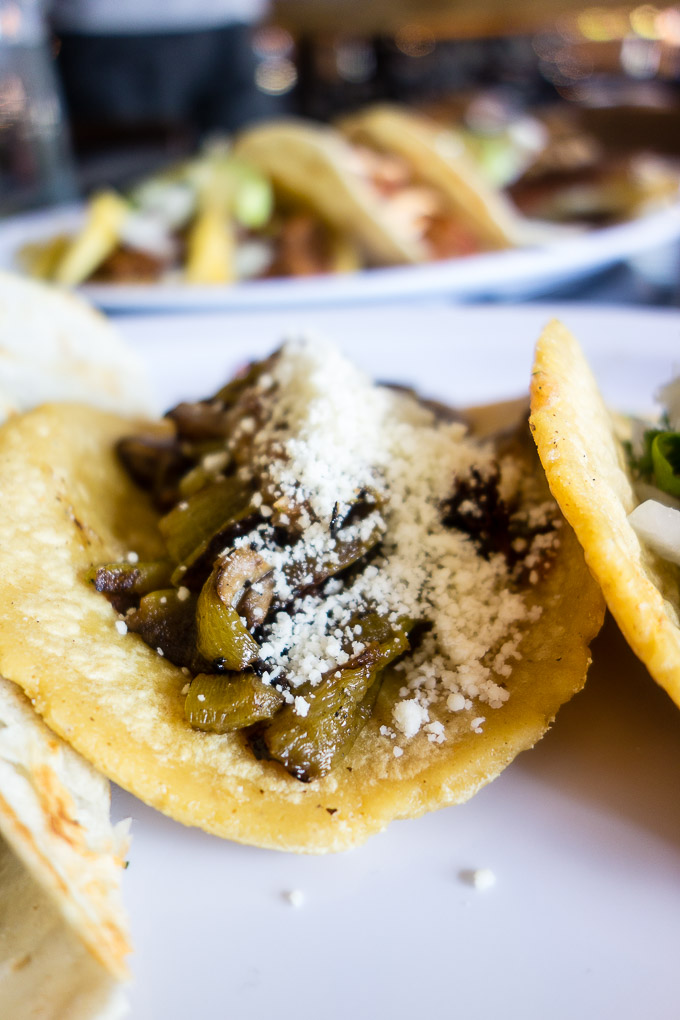 The delicious poblano taco at Fuego

This spot was a food truck. I mean, not literally, it's a restaurant, but the owner had a food truck with basically the same menu down off 22nd street. When he opened this place we were pretty excited to try it. And were quite happily pleased when we did. The seafood was incredibly fresh, and the flavors used melded together so well.

It's not cheap. But it's fresh seafood in downtown San Diego, so it's to be expected. Plus, the portions of seafood are HUGE. The 7 chilies taco is amazing, as was the surf and turf and the jamon del mar (sea ham). The sea ham is exactly as it sounds - it is literally smoked tuna served with sauteed peppers and onions. It tastes like ham. Delicious, delicious ham. In a taco. It's good stuff.

The tostada loca was also a must order. Shrimp and fish ceviche with octopus, scallops, mussels, oysters and boiled shrimp, this stuff was GOOD. Seriously good. If you're down around the ballpark looking for some seafood tacos, this is a great option. 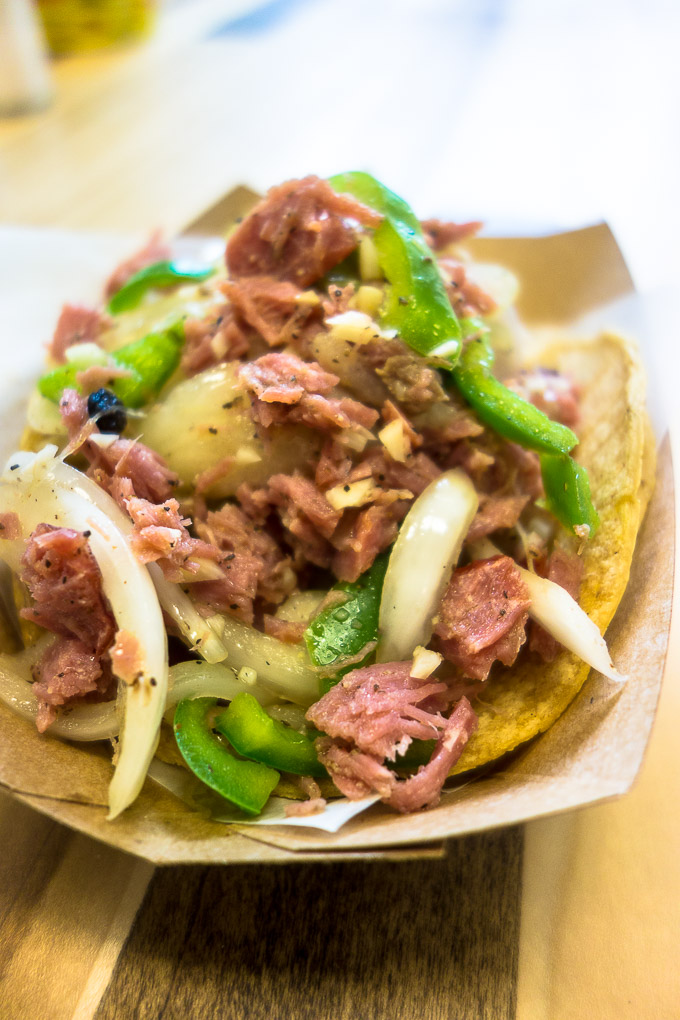 This is more a Mexican restaurant than a taco shop, but it has great tacos nonetheless. We've got street tacos again here, so they are smaller size than your regular tacos. The prices are a bit steep (I think we've covered that downtown is pricey), but it's a great place for some good street tacos and a few margaritas if that's your thing. The cochinita is quite good, as is the pastor and grilled veggie. The grilled veggie is made with onions and poblano peppers, which are grilled and delicious.

The salsa served was amazing! They also serve 1 pound burritos, TJ dogs (hot dogs wrapped in bacon), fries topped with a wide choice of meats, rolled tacos, and many other Mexican specialties. This place gets pretty crowded, so get here early if you don't want to wait. 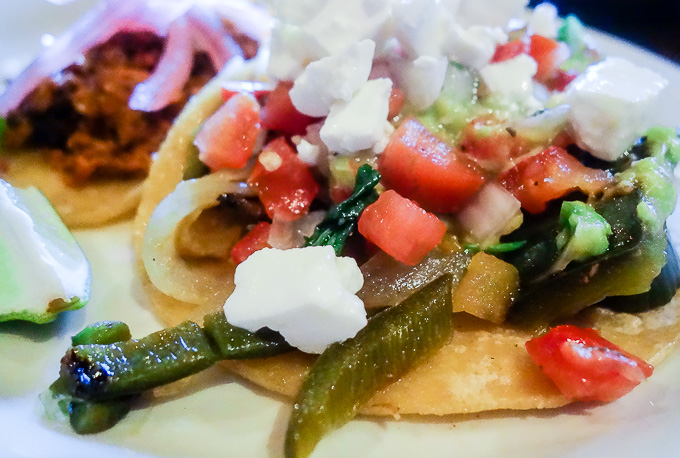 The vegetable taco with poblano peppers and onions at La Puerta

Now next time you're in the city, and craving some tacos in downtown San Diego, you won't be lost. Go to one of these spots and you won't leave disappointed!

Have you been to any of these spots? What's your favorite taco to order? Leave a comment below and let me know - I love to here from you!

Where to find Soup Dumplings (XLBs) in San Diego

Himtsu vs. Sushi Ota: Who does it Best?