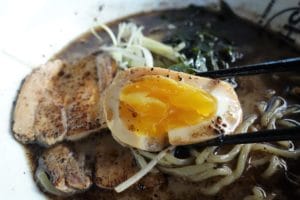 I had ramen for the first time about 8 years ago.  Now, I don't mean the instant ramen we all ate in college, but the real deal.  I went with some people from work, and had no idea what to expect (I was young - didn't know much back then).  We went to Tajima Ramen in Kearny Mesa, San Diego.  I don't remembered what I ordered, I only remember it was absolutely amazing.  And then I didn't eat it again for another 5 years.  Why not you ask?  I mean I did say it was amazing.  I honestly can't answer that, but I am back on the bandwagon now.

In recent years, ramen has exploded in popularity.  I remember a few years back dreaming of someone opening a ramen shop in downtown San Diego, and now we have four!  All my dreams had come true.  Ramen is one of those ever satisfying dishes that always sounds like a great idea.

It is typically classified as either heavy (kotteri) or light (assari).  Kotteri ramen is a thicker cloudier, usually white colored broth known for its richness.  Assari ramen is much lighter, usually made with a clearer broth based with soy sauce or sea salt.  Made with anything from pork, chicken, vegetables, and fish to dried seafood or sea kelp, the broth is typically seasoned with ingredients such as onions, ginger, garlic, say sauce, dashi, mirin, mushrooms and rice vinegar (or any combination of these).  There are 5 "official" kinds of ramen, but many new trendier spots have started serving all sorts of different types.  I have seen gorgonzola cheese, vegan, chicken, and kimchi ramen, as well as ramen burgers and ramen pizza.  Below I cover the main 5, plus a couple ramen related dishes.

Miso ramen is a heavier kotteri ramen made with a generous helping of miso and typically cooked in a oily chicken or fish broth.  Often cooked with pork lard to give it the cloudy white color (similar to the Tonkotsu broth) this broth has an intense richness, almost regarded as creamy.  The broth tends to have a very robust flavor, with a hint of sweetness brought on by the fish.  Typically served with sweet corn, pork belly, chashu, bean sprouts, and thick, curly noodles, this soup has a sweet, nutty flavor.  I have had versions with and without corn, and prefer the corn as it brings out the sweetness of the miso.

This kotteri ramen seems is one of the more popular here in the US, and for good reason.  It is a rich, fatty broth, made from boiling pork bones, fat and cartilage for many many hours over high heat (I have seen recipes for up to 60 hours).  It has a cloudy, white colored broth that is deliciously creamy.  Some of my favorite Tonkotsu broths are also served with a black oil made from crushed garlic.  Typically served with chashu, green onions, sesame seeds, and an egg (hopefully seasoned), this tends to be my go to option. 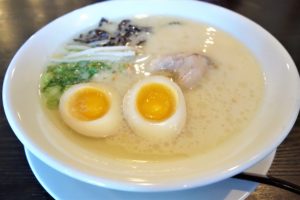 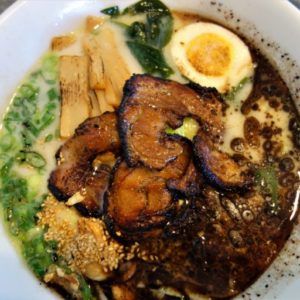 A lighter version, this clear broth is typically made from chicken or vegetables and heavily flavored with sea salt.  It has a very salty flavor (obviously given the sea salt), a slightly yellow color and typically contains a lot of seaweed.  Chicken meatballs are substituted for the pork chashu, and often served with processed fish cake for a healthier option.  The famous seasoned egg, green onions, bamboo shoot and corn are common toppings.

Get the Shio Ramen recipe 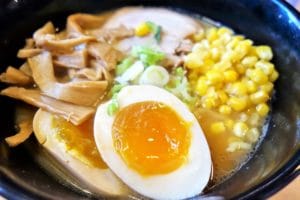 One of the oldest, most traditional broths, this clear brown broth is made from chicken or vegetable stock.  Heavily flavored with Japanese soy sauce, this ramen has a  tangy, salty flavor.  This broth, while incredibly flavorful, is much lighter than the pork based Tonkotsu broth and usually served with thick, curly noodles.  Toppings generally include chashu, green onion, the now infamous seasoned egg, and spinach (in many versions). 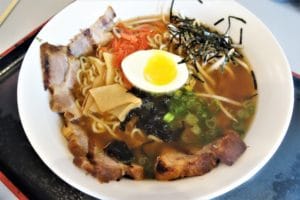 Tsukemen is the step sister to your traditional ramen.  Instead of noodles and broth served in one bowl, they are served separately, with the noodles being dipped in the broth before being eaten.  Typically served room temperature or cooler, with the broth on the side for dipping, these noodles are perfect for a warmer weather day.  What makes this dish great is 1) the broth is typically a mix of Tonkotsu and seafood, 2) flavors are not as limited as with ramen - the noodles can be dipped in the broth, vinegar, and chili for some additional flavor and 3) once the noodles are gone, you can ask that the dipping sauce be diluted to finish enjoying as a soup.  Tsukemen many times comes with similar topping as other types of ramen, with garlic, chashu, green onions, and of course that seasoned egg. 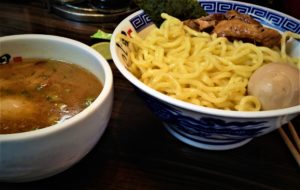 Based off the Chinese dish tantan noodles (also known as dan dan noodles), this consists of ground pork served in a spicy red broth (can be any of the above broths).  This dish is a soupier version of Asian style bolognese sauce and I absolutely LOVE it. 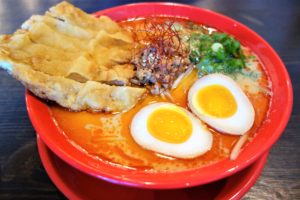 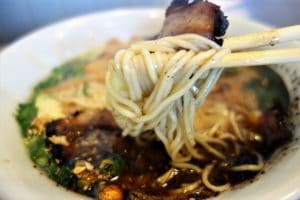 Made with wheat flour, salt, water and kansui (an alkaline water giving noodles bounce and yellow tint), and occasionally eggs, the noodles are either thick and curly or thinner. Thinner, straight noodles are typically served with tonkotsu style ramen, while thicker, curly noodles are served with miso, shio and shoyu ramen.  Fresh made noodles is one of the key ramen ingredients.  While the broth is obviously important, noodles can be just as important as it is the meat of the dish (well not technically the meat per se, but you get what I'm saying).  One of my favorite shops is Tsujita LA Artisan Noodle in LA - the noodles they serve with the Tsukemen are fat and chewy.

Served hot and eaten immediately prevents the noodles from getting soggy.  Slurping the noodles is a common practice to aid in eating the hot noodles quickly before they get soggy.  Eaten with chopsticks and a Chinese style spoon to help eat the broth and the toppings.

What is your favorite kind of ramen and what makes it your favorite? What are some of the best toppings? Do you have a favorite restaurant?